17 September
After getting a taxi at 6:30 we jumped on a train from Junkerath and headed off to Köln before transferring to the train to Hamburg. It was delayed due to ‘malfunction’ and could not reach top speed. Because of this we were 40 minutes late with our connection to Denmark and hence missed the ICE train. We arrived at Odense about 2 hours late and were greeted by Vivienne on the platform whilst Eskil was at home preparing a traditional Danish dinner.

18 September
Back to the town centre on Saturday we explored an old style hardware store where there were many knick-knacks no longer found in the stores of today replacing our special string and leather belt hole puncher. Went off to the fruit & veg market and found some flat white peaches. The taste was better than expected and they looked so different.

19th September
Danish Railway Museum – experienced the 3rd class carriages for the poor through to the rich and Royal Family plus the big locomotives and the rail fixing & inspector/superviser vehicles. Saw the ferries that transported the trains acoss the Danish islands prior to the long bridges and under sea tunnels being built.

20th September
Went off to the Fjord&Baelt porpoise & seal research centre – a wonderfully presented exhibition and education on what is being researched and walking through the underground tunnel and watching the sea life. Watched the training of fur seals and porpoise and learnt about the salt waters of the great belt that divides the Salty North Sea and the less salty Baltic Sea. The great belt runs down through the Danish Islands. Research is even being completed on the influence that the oversea bridges between the islands has on the sea currents of the great belt. Research is also being attended on the sonar ability of the porpoises to avoid being trapped in the fishing nets by attaching noise machines to the nets.

21st September
Up early and went on the train to Copenargen travelling 1st class. Included was breakfast and free internet access. We walked down the main shopping Mall after passing the picturesque town hall and square, buying danish quiches for lunch. We sat in Kings Park for lunch basking in the 20° sunny day. We walked to Rosenborg Palace enjoying the well kept grounds and exploring the history of the kings and queens inside. The furniture and displays were all authentic and interesting especially some of the tapestries on the walls. 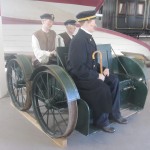 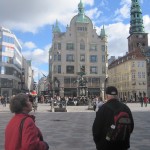 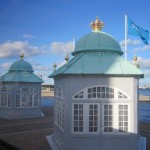 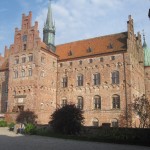 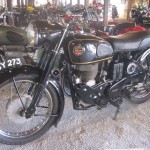 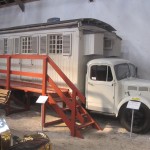 We walked back to the city centre through the Boatannical Gardens and park. As we were weary we hopped on the city sightseeing bus and did a round of the city, most interesting. Even found that the little mermaid was missing as she is visiting China for the world trade show.
During our stop for Danish pastries and coffee we decided to surprize Jean and check out her new appartment. We walked for ½ hour and found her new home. After the grande tour we all went out for dinner together and then back to the railway for our 1st class rail trip home to Odense.

23rd September
Headed off to Kværndrup Station and then walked the 3 kms to Egeskov Castle (supported by oaks piles) and it is said that the castle got its name because the entire oak wood was used to provide all the piles under the castle. The water level is consistently monitored so it does not get too low and let air get to the piles which would cause the castle to sink. The moat goes right up to the castle walls and the castle consists of 2 longhouses joined by a metre thick double wall which among other things, includes a staircase by which the user could move unseen between the cellar and the 1st floor. The castle of today was created in 1554 following the “Count’s Feud” whereby the local peasants attacked many manor houses and this one was updated to make attacks difficult. The castle was opend to the public by a Count Claus Ahlefeldt-Laurvig-Bille (what a great name).

Spent the day checking out Egeskov Castle, the vintage cars and motor bikes,

a couples of mazes (one dating back to 1730), the fairy dolls house (Titania’s Palace – and is on loan from Lego Land) which took 15 years to build,

24th September
On our way to Haywards Heath, just south of London

17 September
After getting a taxi at 6:30 we jumped on a train from Junkerath and headed off to Köln and then transferred to trains to Hamburg (DE) and Odense (DK).